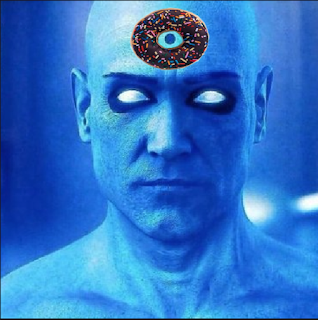 "In January 1971 President Nixon asks me to intervene in Vietnam, something his predecessors would not ask."

It is February 12, 2020.  I am sitting at a McDonalds eating a Chicken McBiscuit at 10:30am. I have just come from a doctor's visit to have blood drawn to check my sugar levels. It is my first meal in sixteen hours. The restaurant is empty save for myself and four older gentlemen seated adjacent my table. One of these men was formerly the proprietor of the late Square Donuts chain in Central, Indiana.

I listen. "When we started in 2013, we were one of a few local chains. Seven years later there are 19 local chains. We can't compete with the scale. Donutry's a good business if you can scale up. We couldn't make it work."

It is May 24th, 2017. Inspired by the premiere of Twin Peaks: The Return I finally stop in at a shop off State Road 32 called White House Donuts. There are old men sitting inside, talking to the owner. He serves me a regular glazed and a blueberry cake. I buy a cup of coffee to make the meal honest. The donuts are excellent. I vow to return someday.

1994. My siblings and I are treated to donuts after daycare. My brother and sister get chocolate icing. I get vanilla just to be different. I decide vanilla icing is my flavor, an association that will wither over time. The memory remains.

May 15th, 2013. I've worked  at Half-Price Books for a year. Today, the morning shift, 7 a.m. My apartment is 5 minutes away. I leave 10 minutes before my shift to stop at a gas station for two fresh Krispie Kremes. A sour-creme crueller and a chocolate with sprinkles, with a large coffee to make it honest. I eat them while taking out the morning trash.

October 15th, 2010. I am teaching assistant for a friend's anthropology 101 course at Ball State University. She brings in dozens of Concannons donuts, baked fresh in Muncie, IN. Her students neglect them. I take two dozen home. That night I slice one in half and insert a freshly pan-fried cheeseburger inside. Pepperjack cheese for contrast. I am not the originator of the Luthor Burger, but originality is relative. it is a perfect food.

June 17th, 2008. I work fifty hours a week in the bag room at a local country club. Today, the morning shift, 5 a.m. Members have a lounge filled with donuts and bagels for their early-morning consumption. At 9 the delicacies are phased out, usually thrown away. I realize the service staff is amenable to handing the leftovers to bag room employees like myself. Cinnamon twists seem to be the last popular with the rich. A summertime ritual is established.

September 15th, 2014. I am still at Half-Price Books. The weight of retail work is weighs on me. I have been commuting twice a week back to Muncie to visit my girlfriend. My time without her feels monotonous. A sign at my local Marsh Supermarket reads "Now hiring overnight donut-maker." I seriously consider it. Will I forgo sleep for donuts? For a secondary passion to alleviate doldrums? I choose not to. A deep regret.

It is March 2nd, 2002. I am camping with my boy scout troop. We plan meals as a team before trips, and they are the sort of meals twelve year olds would plan. Donuts for breakfast. Entenmann's. At the time I preferred the chocolate, but a friend turns me on to the crumb-topped  variant. What a pal. It's a cool sunny morning outside, somewhere nowhere. Whatever skills we will learn, or badges we will gain, I only have one resonant memory from the trip: crumbs.

March 13th, 2019. I have recently become a father. We return home from the Hospital exhausted to find that my mother-in-law has purchased every variety of donut from Rebellion Donuts, sans those with nuts. One set for me, one set for the hospital staff who cared us. Lemon creme, orange creme, M&M topped, and everything else. I split them with my brother-in-law. A taste test. They last a week. Every bite is miraculous.

On July 14th 2016, three friends and I are on the second day of our first Fuck, Yeah! Film Festival movie marathon. I pick up Square Donuts on my way to our hosts's house. An assortment. At lunch I split a chocolate-iced glazed donut in two and once again introduce a hamburger, with pepper-jack, into the culinary proceedings.

It is February 14, 2020. My coworker two jobs later brings me four donuts from White House Donuts near his house in Westfield. I am familiar with White House. He knows they're my favorite. A blueberry cake and one of their cinnamon caramel rolls. We discuss the owner and his son, who have been in the business for decades. 7am opening, sell until the confections are gone. Open the next day, do the same. Old men sitting inside the shop, chatting away. Drinking cups of coffee to make it honest.

Perhaps due to the holiday, other coworkers bring in donuts. Titus Bakery (solidly good), Jack's (over fried), Meijer  Bakery (sticky, sweet). An unpremeditated buffet. As I feast, I am back in the McDonalds. The Square Donuts man is telling his story of fortune and decline. Good business if you scale up. No room for mid-sized donut shops. I will never have a Square Donut again. I will never eat at Marsh again. I will never be that boy scout eating crumb donuts for the first time. I will always be that boy scout. All time is relative. All time is donuts.

19 competing chains in our area alone. I feel a crushing feeling of religious terror at the concept. I am not alarmed. I can just try them all.

Popular posts from this blog

Kentucky Fried Donut Sandwich: Portrait of a Breadhole on Fire 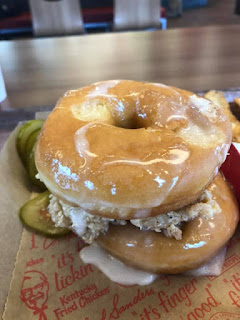 "Do you know where the donuts come from?" we asked the counter staff at our local Carmel KFC.

They shrugged. "No, we just get the dough and fry it."

"In the same oil as the chicken?"

I ordered mine immediately.
----
Because they fry the donuts on site, The  Kentucky Fried Chicken Donut Sandwich (KFCDS) is a white-meat boneless breast slid between two freshly fried donuts, slathered in enough glaze to create a soupy base of off-white sugar when served in a plastic bowl. It is not possible to eat as a sandwich, and requires a knife and fork. Comparisons can be made to Chicken + Waffles, and frankly the surface area of the food is less than most widely available C+W options. Then again, the food here is much cheaper. You're getting more bang for your buck when it comes to dessert and fried chicken meals.
the quality is a crapshoot. My donuts were a little over-fried, which created a nice, slightly crunchy texture. One of my companions,…
Read more

March 1st, 2020. Rebellion Donuts have long been one of my frequent shops in the Noblesville area, being the only donutry that has managed to nail both creative toppings and a good donut beneath them. I went up with my Mom on a Sunday morning after delivering some cardboard to the local recycling drop-off. It's become a ritual for us every few months. Today I specifically wanted to get myself my favorite Rebellion donut: the M&M Topped yeast donut. Ostensibly made for children visiting with their parents, I simply can't enough enough of this thing.
Rebellion's Yeast donut recipe has a few qualities I deeply respect and seldom find: they're enormous, puffy pastries that don't feel *too* airy thanks to a certain chewiness. The outside of the donut is flaky and flavorful, never greasy.  On this particular offering, the chocolate icing is not too strong in flavor. Honestly, many donut makers used canned chocolate icing that is trying too hard. Does that make sens…
Read more